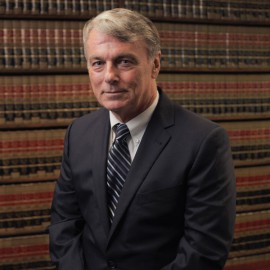 CHARLES X. CONNICK is the founding member of the firm that is now Connick, Myers, McNamee & Fitzgerald, P.L.L.C. He graduated from Cornell University with a Bachelor’s Degree in 1972 and Hofstra Law School with a Juris Doctorate in 1975. He was admitted to practice in the State of New York in February of 1976. Mr. Connick is a member of the Nassau County Bar Association, the Nassau-Suffolk Trial Lawyers Association, the New York State Trial Lawyers Association, and the New York State Bar Association. He is also a member of the Defense Research Institute a well as various other professional organizations. He serves as a volunteer legal consultant for the Veterinary Medical Association of New York City. Mr. Connick has authored a chapter in the Principles and Practice of Veterinary Anesthesia entitled “Veterinary Malpractice.” He was admitted in 1977 to practice before the United States District Court for the Eastern and Southern Districts of New York.